Your Hump-day Recess: Your Attention Please

In the age before television took over the home, cinemas were a sure way to grab the attention of the public. Movie attendance was almost universal, and the public service announcement (PSA) soon became almost as much of a staple in the theaters as the cartoon, the travelogue, or the newsreel.

Road safety organizations took to the theaters with messages about unsafe driving. Many of them, much like those infamous school driver education films, used the depiction of the car crash to warn people of the consequences of drunk or reckless driving.

This message, apparently shown in Cleveland, Ohio, dates from about 1949, judging from the cars. Of note is the warning: “The 1,000,000th traffic fatality in the nation could be you!” 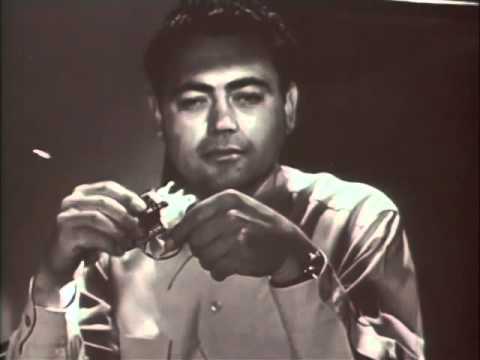 The first year in which traffic deaths were tallied in the US was 1899. About 29 people met their fates in Locomobile Steam Cars and Morrison Electrics that year. The number of motor vehicle fatalities would break a thousand in 1909, and by 1922 the automobile had claimed its first 100,000 lives.

The pace of death increased as cars got faster and more plentiful. It took just until 1937 to hit the half-million mark.

PSAs Don’t Do the Trick

No doubt the mayor of Cleveland’s Traffic Safety Education Committee had hopes that the message would stem the tide of mayhem on the roads, but it was not to be. Deaths climbed, for obvious reasons. First, cars were faster than ever.  Second, roads were getting better and easier to drive fast on. Third, cars were lethal in a crash due to scant knowledge or even consideration of safety. And fourth, drunk driving was common.

According to the stats, road fatalities climbed pretty steadily through the 1940s and 1950s, pausing only during the war years when gas and rubber were scarce. They reached their pinnacle in 1979 or 1980, depending on whether you go by deaths per vehicle mile or percent of population.  In any case we were dispatching about 51,000 people per year then.

Technology and Laws Make a Difference

And that 1,000,000th traffic death? By our calculations it happened in 1953. Don’t ask us how many have died on the roads altogether since 1899. We prefer to think about how many lives have been saved – we estimate close to a million – by all the efforts that came since 1980 – air bags, ignition interlocks for drunk drivers, campaigns to keep people from driving drunk, and many advancements in crash and injury prevention.

That unfortunate millionth person has come and gone. And so has the movie house road safety message. What remains is the knowledge that alcohol-related road deaths can be prevented, not just by persuasion but by technology. Here’s to the next million lives saved.